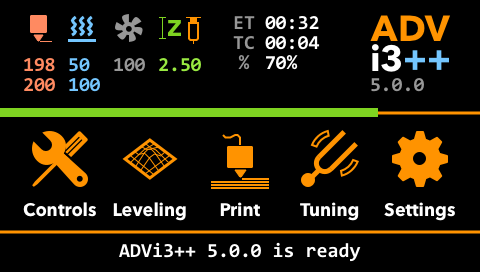 As announced on ADVi3++ Community in January, version 5 is in development. In fact, since January, I have made great progress. The development version is now in phase with the latest release of Marlin (version 2.0.7.2) and all planned features are implemented.

I am now in the final test/debugging phase. I plan to do this during April and release version 5 somewhere in May.

Here are the new features or changes in version 5:

Again, thank you all for your support especially those who are supporting ADVi3++ for more than two years. It is so incredible.

I’m looking forward to this update

I can also see where the new X-Axis twist compensation tool is going to help a number of users including myself.
This was pain to fix as it’s hardware, not software that causes it, but having the software compensate is a major bonus for those of us who have had the twist.

Are you moving levelling out of control?
The icon looks better

Let us know when your ready for wider testing out in the world.

Are you moving levelling out of control?

Very much looking forward to this release. Happy to help test on an i3 plus.

Thank you for the update Sebastian. Look forward to the v5 release.

A quick update of my progress so far:

The very last steps are often difficult. I will continue to inform you when I have news.