I am still planning to continue and enhance ADVi3++ for the Wanhao Duplicator i3 Plus printers and their clones. In particular, ADVi3++ does not support the power-loss resume feature of Mark II and I want to address that. But those printers are somewhat old now. I am thinking for quite some time to port ADVi3++ to another printer (or printers) but which ones?

Not all printers would benefit from ADVi3++. Several have a good stock firmware and for others, Marlin is quite good without any modification. The advantage of ADVi3++ is the way it handles the LCD touch panel and the features it provides thanks to that.

What do you think? Which other printer do you have and do you which to have ADVi3++ for it? Let’s start a discussion.

Thanks again for your support, past and present.

I have an Flsun Q5 delta printer and stock isn’t that great in my opinion. I do have it running marlin now but it’s some what buggy. The lcd is a small one so might be limiting.

I plan on getting a Creality printer or maybe an anycibic next and wonder what the firmware is like on those. Seems to be brands that a lot of people have, wondering if they would be suitable?

I have been playing with the idea of one of the Creality 3D printers (The Sermoon D1 model).
The problem with Creality is they have too many models to choose from, but having the ADV firmware upgrade option on one or two of their models would make choosing a new printer easier for me.
Creality printers appear to common and easier to get spare parts OEM or aftermarket.
My 2 cents worth of comment.
Thanks.

The Ender series of printers are probably the most common printers, but their software is already okay.

I recently purchased a Tenlog D3 Pro IDEX printer to compliment my MSP. This thing could really use firmware as good as ADVi3++, as the firmware is very glitchy and not well supported by the company.

It is another “low priced” printer like the MSP is, but the hardware is decent enough. Just the software is glitchy.

Nice topic, Sebastien!
I’ve been thinking about another filament printer and there are several points I consider in this decision:

All in all, if I forget about the first point, my choice is Artillery Sidewinder X2 because of the points above, and it also has AC print-bed heating, making it really fast, and a must-have direct drive extruder. 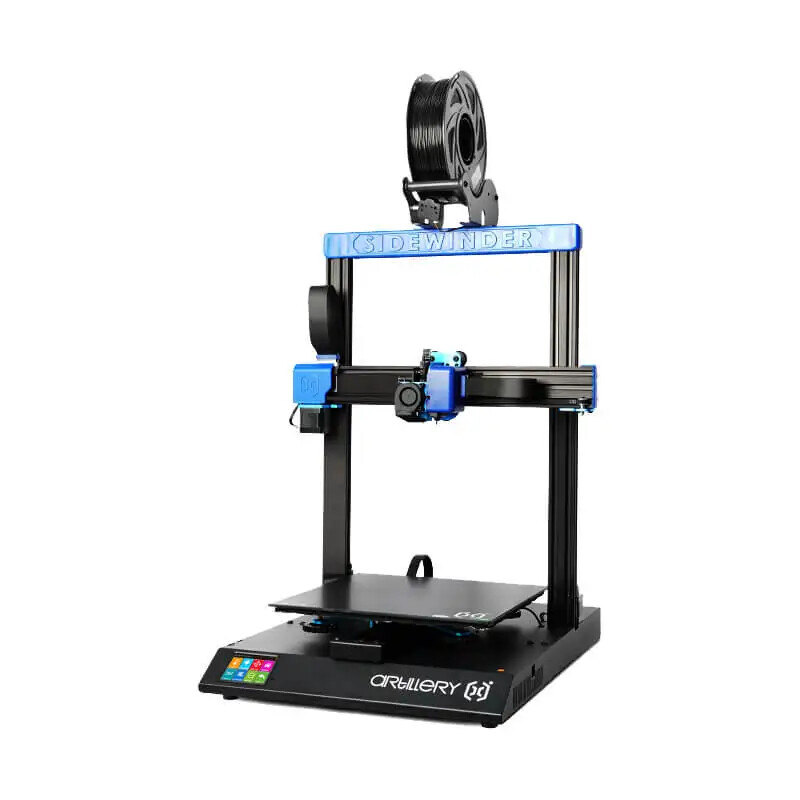 Have you considered the SnapMaker Original? It’s a nice platform but the software sucks

This printer is quite expensive and very special since it is more a CNC machine than a 3D printer.

And what about the latest Wanhao D12 with dual extruder? 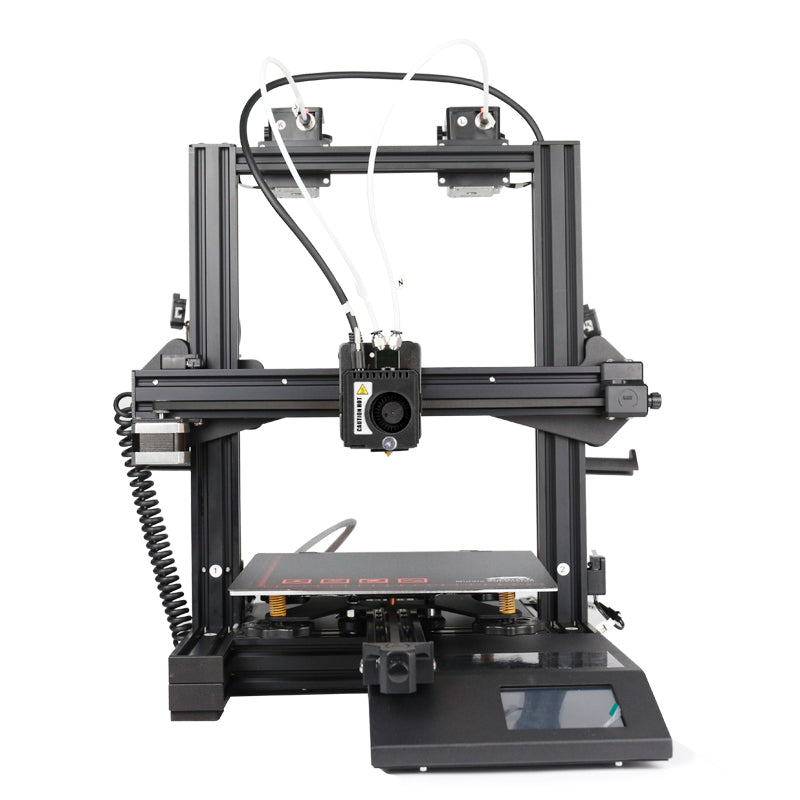 This link only for European Customers: 1- The printer will be shipped to you from WanhaoFrance. 2-You also can purchase our Wanhao D12 printers from local dealer. Here is the store link: https://www.wanhaofrance.com/   Wanhao New FDM...

It is an interesting piece of hardware. Didn’t know about it.
I should only consider the benefit of double extruder with Bowden system vs single extruder with direct drive. Something to think about

I would like to experiment with dual extruder, and it is difficult to get direct drive with them so it is an acceptable choice for me. Regarding this specific printer, it has:

For the later point, i am not so sure but I see that have a distributor in Europe (France)

So I decided to order one. It cost me a little less than 300 euro with the 3D touch and shipping. This way, i will see if it is feasible to port ADVi3++ to this printer, especially for the screen part. It is very different from the wanhao i3 plus one, so i will probably have to rewrite a lot of code. But if i can port ADVi3++ to this printer, i can probably port it without too much effort to other printers.

Ok! I do agree with you. It is worth for double extrusion. I will wait for your comments after you test it.

If you hope to support this too, then this will be very cool. 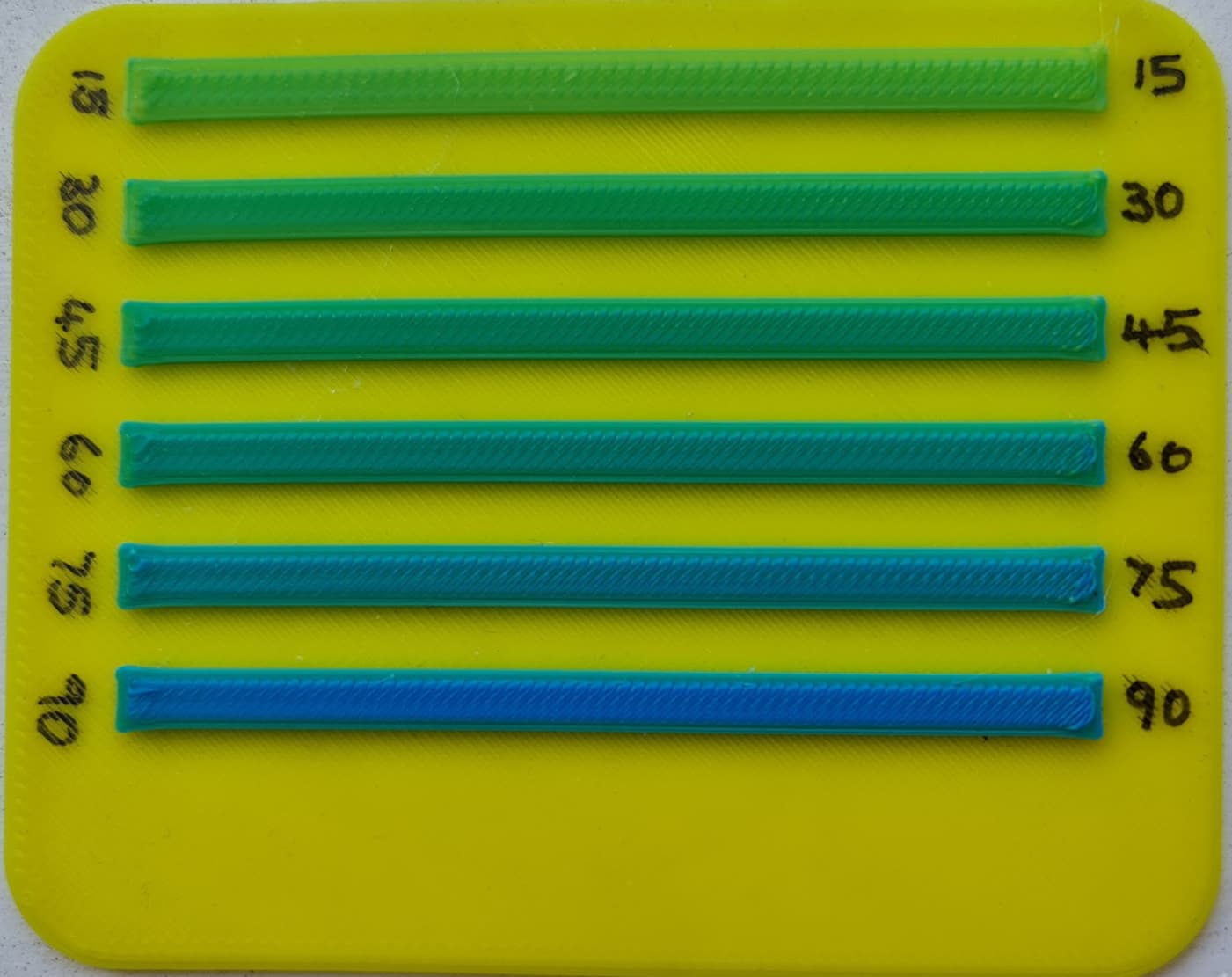 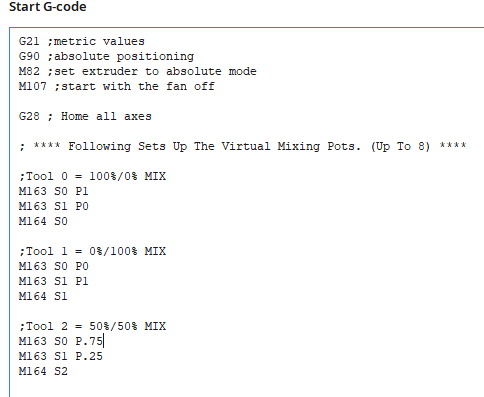 It does not have a touch screen, isn’t it ?

Sorry My Message should have read…

If you hope to support this too on the D12, then this will be very cool.

I will not support printers with only a text LCD and a knob. I do not see what ADVi3++ can offer for such printers.

If the D12 is an acceptable choice then I hope you can add the Virtual mixing pots.

This would be very cool…

I understand now. Thanks for the suggestion.

I received the D12/230 some time ago. It is a printer based on the Makerbase Robin Nano 1.x board and their 3.5 TFT touch screen. A nice 32-bit board. I bought the D12 with dual extrusion, but I have not tried this yet, I have only performed single extrusion prints. I do not like the stock firmware. For example, you have to hit repeatedly a button to move axis, you can’t just press, keep it pressed and release when you want to stop. Text on the screen are so small. They have fancy icons, but with colours that make them difficult to recognise, at least for me. Their latest version is able to display a thumbnail of the object printing, but the image is performed by the slicer and thus you need to install a plugin (only available for Cura). Why not, but a little useless in my point of view. 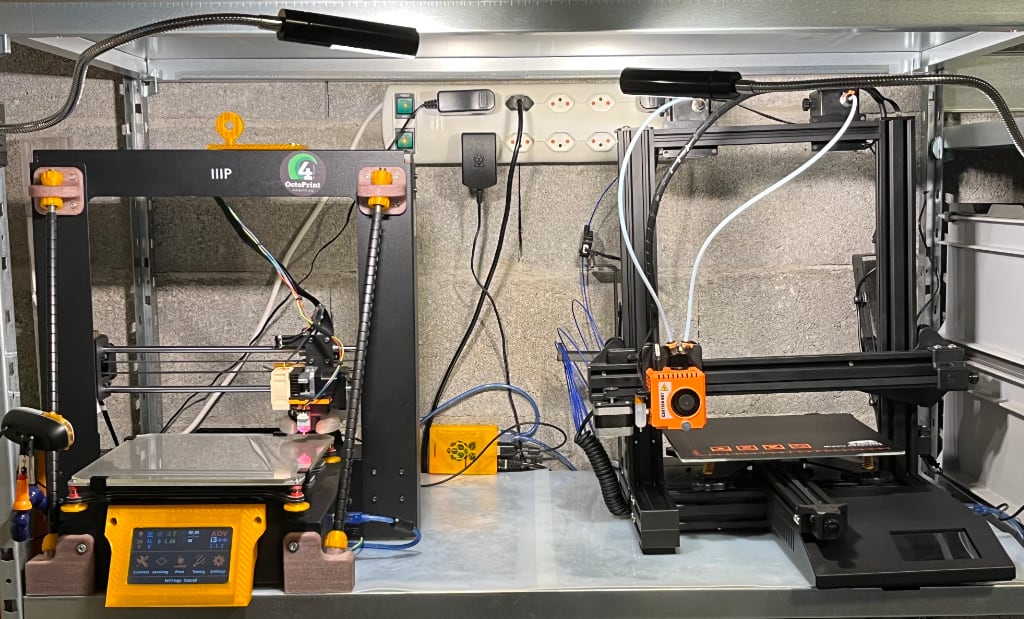 The LCD panel of the Wanhao i3 Plus was a very smart one in the sense that it was a small computer by itself (this was the only way I suppose to use a touch screen with a very limited 8-bit motherboard). This is not the case of the MKS one which is dumb. It is like an external memory of the processor and this later has to do all the job of drawing the screens. It also mean that I will have to program that. The stock firmware uses the LVGL but I will probably use something else.

To help me in the development, I bought another MKS Robin Nano 1.2 board and I have a ST-Link device to be able to flash and debug firmwares. 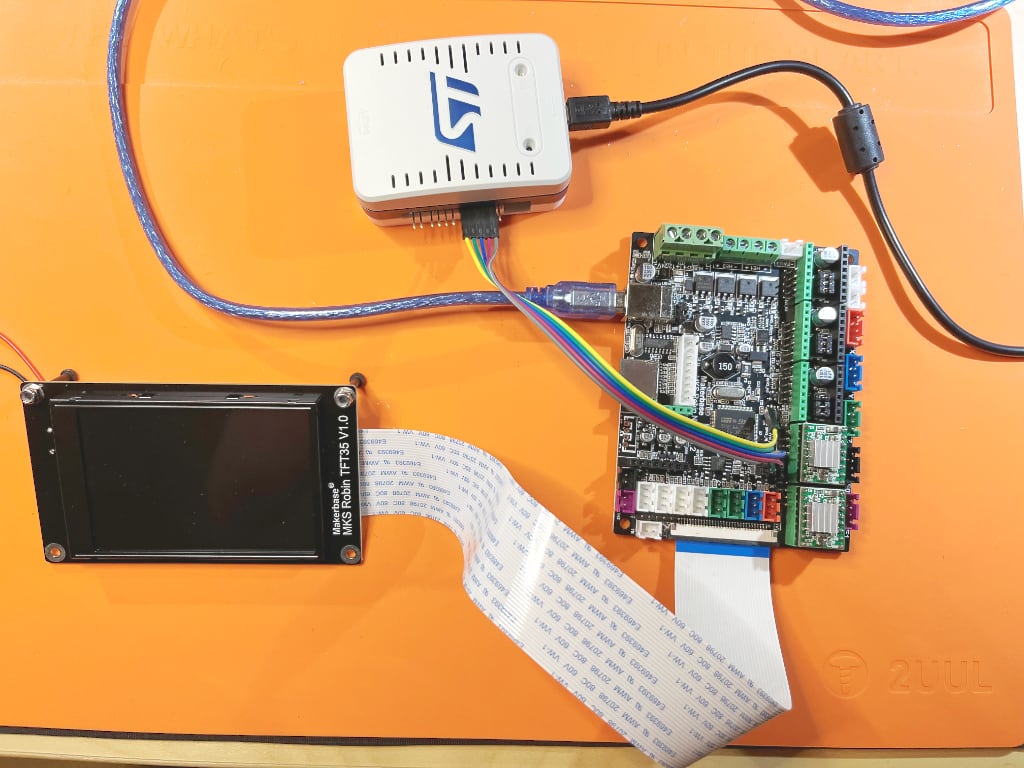 I have also bought two Nucleo boards (one for each MCU used by the MKS Robin Nano 1.x boards) to also help develop and debug ADVi3++. 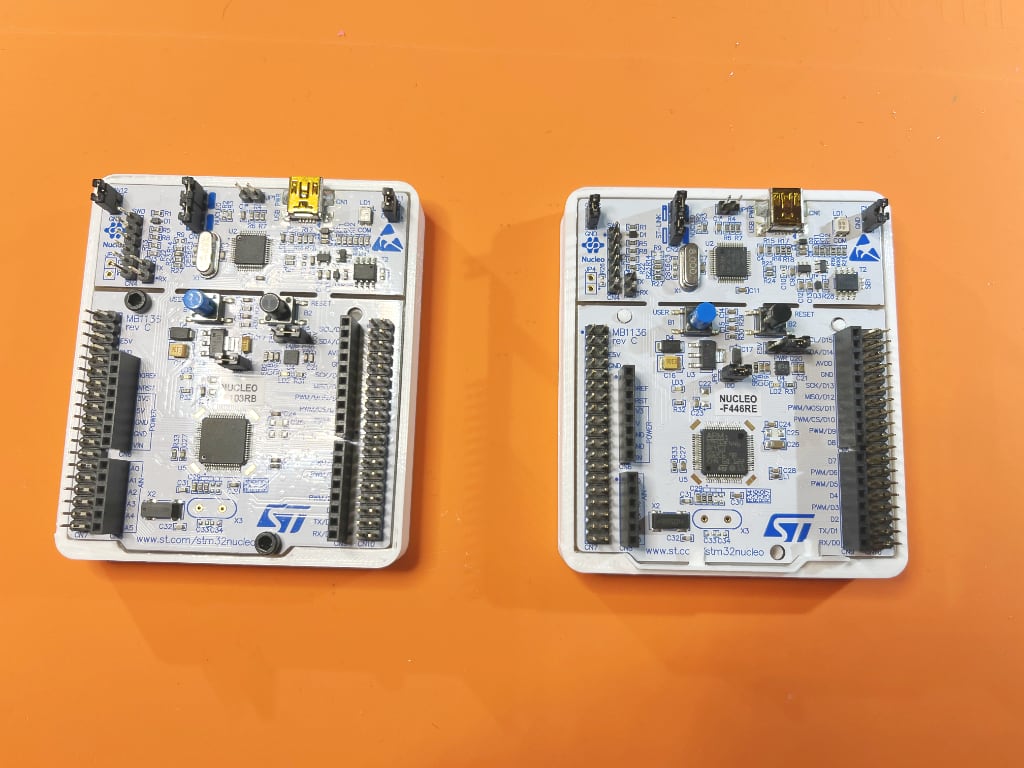 As I will continue to develop ADVi3++ for the Wanhao i3 Plus, it will take me several months to have something stable. I will call this flavour of my firmware ADVi3++MKS. And of course, I will give some news about the development from time to time.