Touchscreen works but doesn't do anything

I busted my old LCD screen on my Monoprice rebranded Wanhao Duplicator i3 Plus, so I decided to replace it with a new one. I flashed it with 4.0.4. It did get stuck after flashing (just wouldn’t go to the main menu) but I figured since this was my first time using ADVi3++ that was normal. I flashed the mainboard with 4.0.4. Mainboard flash went fine. The LCD showed the “EEEPROM settings not compatible” warning until I disconnected the printer from USB.

I rebooted the printer and the menu loaded up flawlessly. I can touch all the buttons and they light up as if they’ve been pushed, but nothing happens. Temperature monitor on the main screen shows correct data. I re-flashed the LCD and the mainboard with 4.0.4 and the issue persisted. I tried to downgrade the LCD to 4.0.3. It still reads 4.0.4. The screen is not “bricked”, just not doing anything after each button push. I did try the 4.0.5 calibration image (Since I can’t reach calibration normally), and calibration went fine. Those controls responded.

I’m basically out of ideas at this point. Any suggestions? Cable was working fine with old LCD, but if you suspect my cable from mainboard to LCD is bad, can anyone tell me the specifications (pitch, pins) to replace it?

I decided to replace it with a new one

This is normal. The mainboard part is still at version 4.0.4, and this is what is reported on the screen.

What you described looks like if the LCD panel is receiving command from the mainboard, but does not send commands back to the mainboard. It could be that the cable is not well inserted into its sockets.

I checked the continuity across the ribbon cable. All seems good.

I tried hooking up the old LCD and it will respond to button presses and allow me to navigate the menus but since the mainboard is newer now it won’t preheat or read the SD card or anything.

By the way, the screen does dim after a while and re-light if you press anything.

Could one of the connectors on the screen itself be defective in this case? Commands maybe not getting from the button pushes into the mainboard?

the old LCD and it will respond to button presses

Button presses (the fact that the button change under press) are handled by the LCD panel itself.

allow me to navigate the menus

This is handled by the mainboard. So it means your cabling is correct.

re-light if you press anything

one of the connectors on the screen

It looks like the connectors are OK (since both the LCD and the mainboard are communicating). So more probably, your new screen is defective. Maybe the flat, rigid cable between the top of the screen and the back is damaged.

In your expert opinion, is this the only possibility you see? Is there no possible way this could be a software issue after describing what each screen is capable of? I would like to eliminate all possibilities you can think to test if I’m in fact going to need a new screen.

Actually, I just noticed. My old board has a solder between a couple of contacts in the upper left that the new one does not have. Some kind of jumper near a chip.

Well… I took the new screen off the new board and put it on my old board in place of my broken screen and flashed it. Wouldn’t you know it, works like a charm. I guess it’s time to ask for a refund on that part.

Hi Rajada,
I have the same symptom with two new replacement touch screens that I purchased recently, unfortunately I am unable to use my old board as it is damaged. I have looked at the old board and the new board but I do not see any extra solder or jumpers on the old board.
Could you send a picture of your old board with the modifications?

Thanks in advance.
Doug

@andrivet, Can I trouble shoot this issue?
If I connect the USB cable to the Arduino IDE Serial Monitor on my Mac will see any output from V4.0.5 when I touch the LCD screen?

I thought I replied to this, but don’t see my message… so probably has done something wrong.

In general, no. I do not log things when receiving data from the LCD. Memory is precious on those devices, so I log the minimum. There are some actions (like in the Move menu) that triggers commands and those commands are reflected on the serial port (USB).

But if you have a USB to TTL cable or board (and some wires), you can connect it to the LCD (GND, 5V, RX, TX) and send and receive LCD commands.

Thanks for the quick reply.
I don’t have that type if device. I’ll look on Amazon. We are sequestered to our homes in California now so I’ll have to get it on the internet.
Do you know the web site where I could get the DGUS commands?

If I am not successful, what is the best way to get a display to you? I bought two displays from AliExpress.

So, I bought my new screen from AliExpress too. Just a warning, the seller never refunded me. When I got AliExpress involved in a dispute, they had a “private conversation” in Chinese and wouldn’t tell me what was said, and invalidated my claim despite video evidence. They’re either selling bad or incompatible boards. I also had 2 or 3 service representatives offer me refunds, then not go through with it. They refuse to let me see transcripts of these conversations. So be careful if you try to do a return.

In the picture, the circled area had a soldered connection on my original board which is not present on the new one. 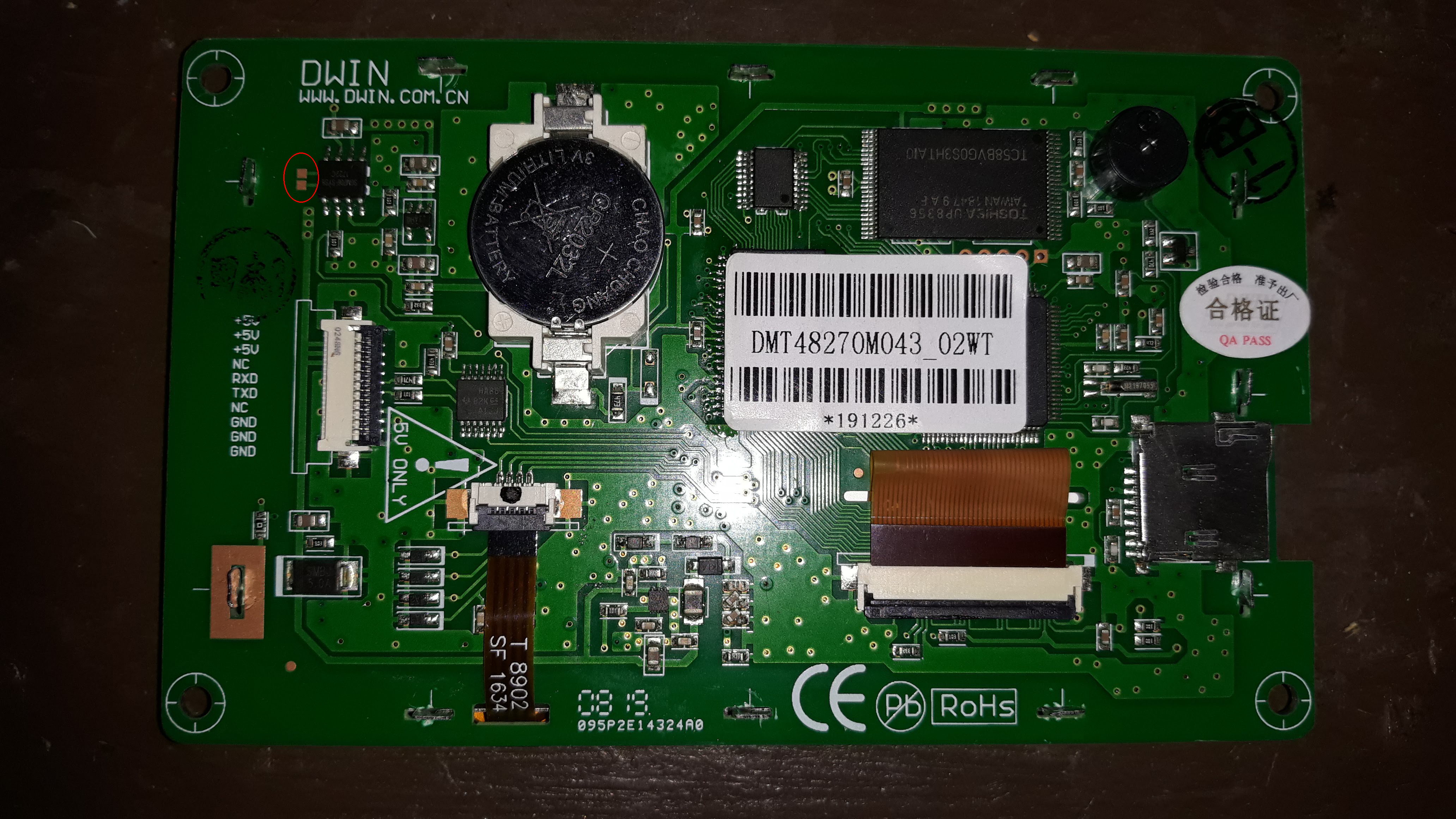 I can’t take a picture of my old board as I’m printing some large orders at the moment (I use my printer to run a small online business), but this was the only visible difference I could find.

There are plenty of such cables or devices. Just look for “USB to TTL” (Adafruit, AliExpress, Bangood, …)

Do you know the web site where I could get the DGUS commands?

So this is not an easy path and is pretty advanced.

And from my experience, most of the time the problem is not with the LCD panel but with either the cable or the connectors,

That is the exact display that I purchased(2).

I looked at the DWIN DGUS website and the version is now at 2.0.
I think my old display was something different but it is broken now. 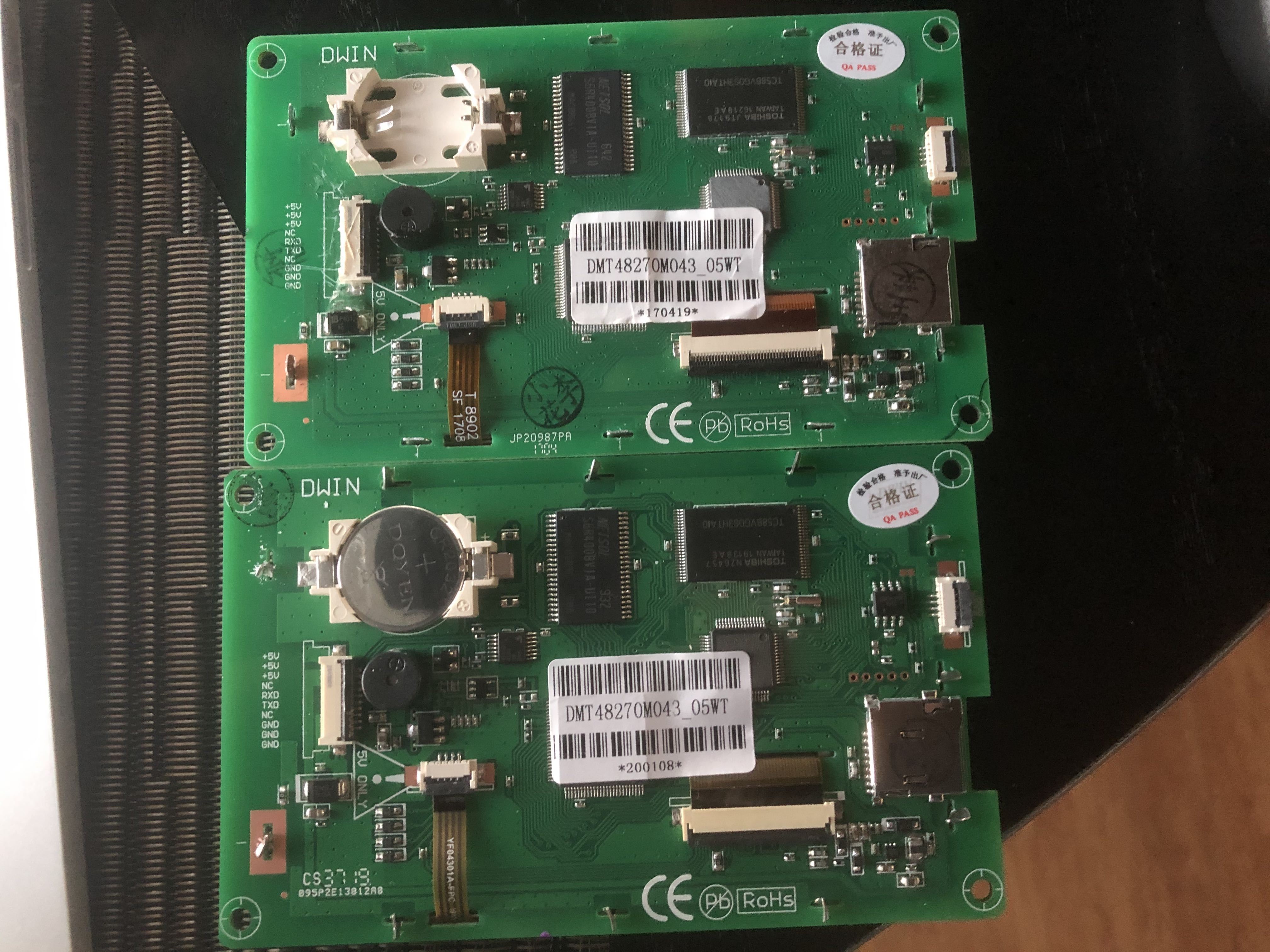 Here is a picture of my old display board (top) and the new one (bottom). They are the newer DMT48270M043_05WT so the layout is different with no solder pads.

@andrivet I looked at the instructions and two videos on Youtube. Even beyond the Chinese characters fooling with the display is above my pay-grade ;^0.
I ordered a used MMSP from Amazon today so I can get back to printing.

Version 2 is another kind of displays. It is version II of the (full) DGUS, not the mini DGUS. Mini is based on an AVR microcontroller. Full DGUS are specific microcontroller (K6000 and T5)