Hi,
I’m having issues with my extruder motor. It stopped working all of a sudden at the start of a print and refuses to operate now. I’ve tested the stepper motor by plugging in the x axis cable and operating the x axis and that’s fine. However, plugging in the extruder motor cable into x axis stepper has no reaction, even when extruder is up to temp. I’ve checked the cable and it has continuity. I’ve also checked the interface PCBA and I have continuity between the large multi pin ribbon cable housing and extruder connector housing. The rest of the components on the PCBA are working which would suggest the ribbon cable is fine. So it seems to suggest there’s an issue with the main board, possibly a dead driver?

Has anyone seen this issue before? Is there a fix, aside from replacing the main board? Finding a replacement main board for my Aldi Balco printer is difficult, I’ve only seen v5.1 and v5.4 boards online, struggling to find the v5.2c board that I have.

Any help would be greatly appreciated! I really hope I don’t have a dead printer on my hands

So it seems to suggest there’s an issue with the main board, possibly a dead driver?

Ah I see. Time to upgrade printer I guess.
Thanks

I was in a similar situation, I ended up with an external driver board for the E motor (And a separate cable running to the hotend area), wired into pings 2,3,4 of the EXT connector.

This requires building from source (and modifying the E0 STEP/DIR/EN pins in the board configuration file), but got back up and running for about $20, rather than a new MB (or full electronics swap)

A little late here, but if it is a dead driver, it is possible to replace them if you have OK skills with a hot air station. I’ve replaced the X and E drivers on my board (MP Maker Select Plus) and they they have been working fine since. For anyone that decides to go this route you can get the A4988ET drivers from Digi-Key and removing and replacing them was not too bad with a hot air station and a bit of solder paste. If you can go this route the drivers are pretty cheap (about $3 each in small quantities).

Interesting solution. Do you have a wiring diagram of how you used an external driver board connected to the EXT connector? Does the board have to be A4988? Or will a TMC2208 work?

When you say modify board configuration, is this what you mean (see image attached)?

I used one of these boards: https://www.amazon.com/dp/B07JLRQRCS/ref=cm_sw_r_cp_apap_gdWo3snKkVZnU , mounted off a corner of the main board, using some dupont cables to hook up pins 2,3,4 to the controller board.

Your proposed changes to the pinout file look just like what I used.

You’ll also need a 1m stepper cable, which I ran along side the ribbon cable to the extruder motor.

The link to the board doesn’t seem to be working. If you can give me the description of it, I can do a search.

BTW, thanks for the quick response!

Found the link to the board. 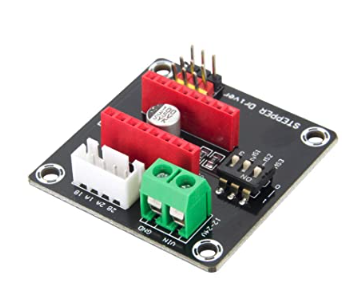 Hi, I’m looking to do the same fix for my printer since it’s stepper driver isn’t working anymore either but I’m not sure about where you connected the pins 2,3, and 4 from the mainboard over to the additional driver board. Detailing more of what you did with the wiring between the mainboard and the driver board would be worlds of help. Images would also be greatly appreciated.

I’ve also wanted to upgrade my stepper motors to some pancake motors to lighten the weight of the extruder assembly. Do you know if the stepper board would be able to handle these motors? https://www.amazon.com/gp/product/B07TGJSRGZ/ref=ppx_yo_dt_b_asin_title_o04_s00?ie=UTF8&psc=1
it the motor’s specks similar enough to the stock one to where I can just drop it in as a replacement motor without issues?

I only get to work on my printer during the weekends

I’ll try the external driver option this weekend and if it works, I’ll post here how I got it to work.

As for a pancake stepper motor, I actually am planning to do that mod too. But I need to get the external driver to work first. I’m sure any stepper driver can operate a pancake motor. Although I think using a pancake motor will produce less torque. So you would need a better way to grip the filament. The current bearing based setup would probably need to be replaced. Here is what I was planning to use… (this used to be just $26 – dunno why price went up). 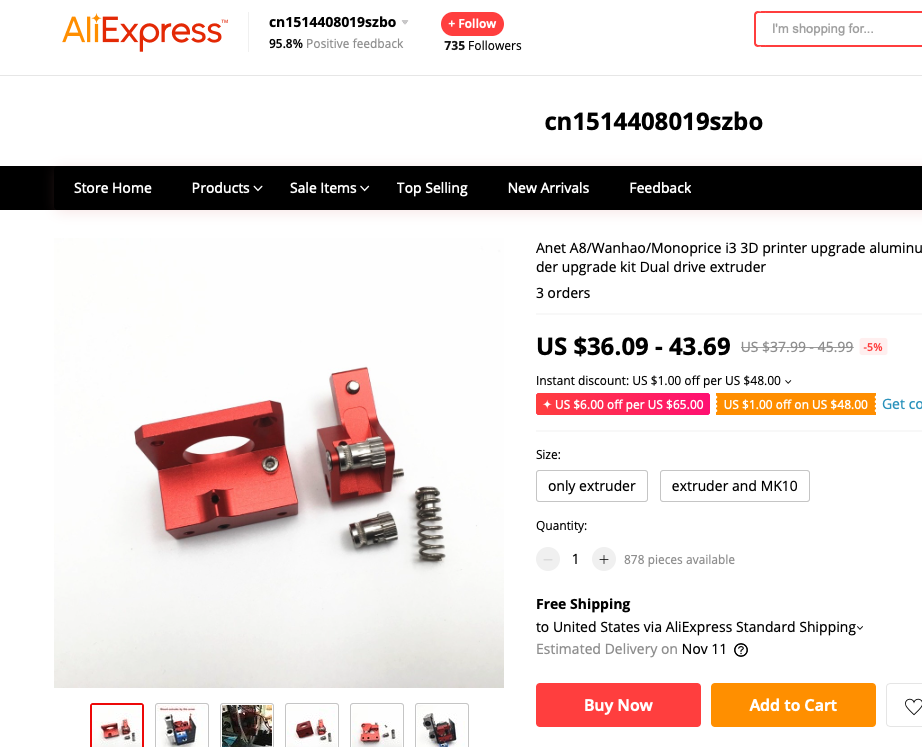 Thanks a ton!. I actually was expecting the Stock drivers to handle a pancake NEMA 17 but ever since trying them in my printer my E driver seemed to have blown out. I saw someone else online run into an identical issue when trying to upgrade his stepper motor on an I3+ but his firmware swap fix hasn’t worked for me leading me to belive my driver is boned.

Thanks again for the help, I’ll be keeping an eye peeled for when you can work on your printers!

The listing for this pancake stepper lists the holding torque at 42Ncm, and I believe it. Also, at 23mm, it just barely clears the frame with the head all the way to the right, so no loss of x travel. I did turn the extruder driver down to .7v since the motor was getting pretty warm at the default .8v. With the extra mechanical advantage of the 3:1 gearing it still pulls like a champ and now stays cool. I probably lost a bit of z height, but I rarely print things that need the full z travel.

This thing solved all my jamming problems with PLA on with the MicroSwiss hotend. Pretty happy with it all around.

Dave, that extruder looks interesting as well. Curious to know how it works out for you when you get your printer up and running again.

the servos you linked are the exact same ones I used. ever since I tried replacing them they seem to have caused my driver to blow out. I’m now entirely sure what happened but considering I tried everything else the driver being blown is the only explanation.

Were you able to drop the pancake steppers in without issue? Did you run into an issue where the stepper studded back and fourth in place?

Here is what I had done so far in trying to bypass the defective stepper driver with an external one. Somewhere in that link is the correct wiring for the winsinn pancake motor. It is still a work in progress. It has all diagrams and plans BUT HASN’T REALLY BEEN PROVEN TO WORK YET. I’m still waiting for the 10 pin hammer header to arrive before I test it. I know I should have just soldered wires onto the board. I don’t trust my soldering skills

I believe I ruined a stepper driver by connecting it to a motor incorrectly before checking the wiring. I figure it would not be too hard to blow the driver if the phases were shorted. Luckily, I ordered several replacement A4988ET drivers and had a few spares on hand, and managed to replace it.

The stepper I linked above seems to be running fine at .7v. I just have a few prints on it, but they were fairly long prints (about 40-50 hours total) with one 10 hour print being ABS in an enclosure. I figure if it was going to fail, it would have likely done it by now. I do have a geared BMG extruder vs direct drive so that will make it more forgiving on the stepper.

As a side note, I can’t believe I waited this long to change to a dual drive BMG extruder. That has been night and day compared to the variations on the stock extruder I’ve been using until now. I have not had a single jam since the upgrade, and the filament seems to flow much more consistently than with the stock extruder set up.

I got an external stepper driver to work. I created a new thread for it here.

Thank you for the idea and information posted earlier in this thread.